The judge told the jury, “Not every lie amounts to perjury” and that the former News of the World boss’ alleged lies about phone hacking were not material to main case at the Tommy Sheridan trial and so the case was thrown out.

People inevitably took to Twitter commenting on the case – and saying again how little they trust journalists.

It’s four years since the News of the World closed but still people feel aggrieved by what they saw and still they feel little confidence in journalists to tell the truth or to be capable of integrity, loyalty and political principle.

Still few see or accept the reality of the pressures on journalists to do as they’re told. Too many think journalists live in some Daily Planet bubble where they can run into the offices of editors like Andy Coulson and demand to be heard, demand to tell their story, demand not to write something racist or sexist. We rarely can. Like most workers we simply don’t have that power.

And – just like other workers – we get bullied if we do stand up for what we believe in.

Michell Stanistreet, the National Union of Journalists general secretary, told the Leveson Inquiry: “”The range of issues the journalists have raised with me include, but are not restricted to – endemic bullying, huge pressure to deliver stories, overwhelming commercial pressures which are allowed to dictate what is published and the overweening power and control of editors over their journalists and of employers over their editors.”

She added: “They feel too scared and frightened to give evidence in a way 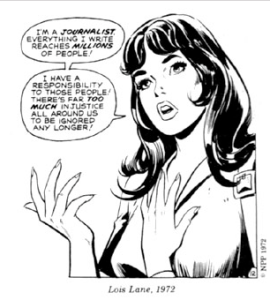 which would allow them to be identified by their current or prospective media employers. Those who have experienced or witnessed bullying of a vicious and engrained nature have largely been too fearful to speak out in case they lost their job or were forced out.

“Those who have witnessed first-hand unethical behaviour or been pressured into working in a way that is unethical are frankly terrified about being identified.”

Rich Peppiatt, writer and director of One Rogue Reporter, walked out of the Daily Star offices in protest at what he saw as anti-Muslim propaganda, stating: “I may have been just a lowly hack in your business empire, void of the power to make you change your ways, but there is still one thing that I can do; that I was trained to do; that I love to do: write about it.”

Peter Oborne resigned from the Telegraph over what he considered its fraudulent coverage allowing HSBC to influence content for fear of losing ad revenue, saying: “I expressed all of my concerns about the direction of the paper. […] I was resigning as a matter of conscience. Mr MacLennan (chief executive) agreed that advertising was allowed to affect editorial, but was unapologetic, saying that “it was not as bad as all that” and adding that there was a long history of this sort of thing at the Telegraph.”

But it’s not all about national journalists and indeed certainly not all about tabloid journalists. The industry – trade press, local newspapers, regional titles, magazines – is rife with bullying and workers too scared to stand up for themselves or for their work because they fear they will be sacked.

Phil Turner has worked at the Rotherham Advertiser for 30 years. He is also the chapel’s FoC – that is he is the National Union of Journalists shop steward.

Phil has been singled out by bosses for compulsory redundancy. The NUJ is appealing the decision, seeing the targeting of Phil as a deliberate attack on the journalists’ union and on the wider trade union movement.

Phil’s colleagues are defending him. They intend to strike on June 11th and there is a protest this Saturday in Rotherham’s All Saints Square at 12 noon.

Chris Morley, the NUJ’s Northern and Midlands organiser, said: “The company has made a grave error in selecting Phil for dismissal in such a transparent attempt to reduce the effectiveness of the chapel at the Rotherham Advertiser. Even when required savings were found elsewhere, the new management of the company still insisted that a compulsory redundancy had to be made in editorial and that it just happened to be the FoC.”

It’s time to recognise journalists don’t have some innate power unavailable to other workers.  We’re not all Lois Lanes and Clark Kents (even Clark Kent left the Daily Planet tired of the drivel he had to produce).

And we depend on union support and solidarity like other workers.

Also … we’re not all phone hackers. We don’t sit gleefully writing racist crap. We don’t shovel shit into the internet and think we’ve got it made. We do recognise the influence of advertising and of corrupt bosses. We get bullied and victimised.

You can also send messages of support and solidarity to Phil Turner:

Email the chapel and copy in the NUJ campaigns and communications department:
syorksnuj@hotmail.co.uk
campaigns@nuj.org.uk